We are very happy to announce that Haunted Planet Studios, the company run by Games & Narrative Group member Mads Haahr, has received two awards at the Irish Games Festival for a game based on Bram Stoker’s (author of Dracula) life and narrative world. 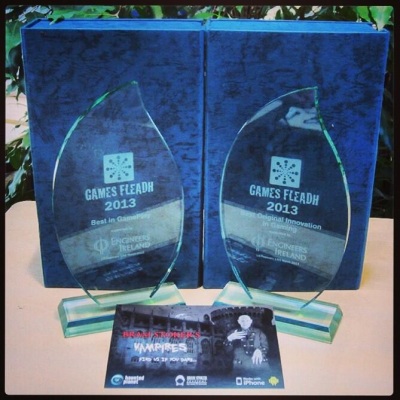 Bram Stoker’s Vampires is available on iTunes and Google Play.

Narrative in a platform game? Maybe not in the sense of a coherent and complete narrative experience.  Yet, there is something in Arnt Jensen’s Limbo – a highly stylized, evocative atmosphere, that simultaneously elevates the game well above the average in the platformer space and raises awareness for the potential of atmosphere as part of a narrative strategy in interactive and game narrative.

Presented entirely in shades between white and back, the game takes visual clues from black and white silent movies and animations but transforms this aesthetic for digital media into a representation with a limited palette of shades reminiscent of cut-outs that includes visual effects like transparent water and fire, as well as a reduced but efficient sound design.

END_OF_DOCUMENT_TOKEN_TO_BE_REPLACED

This is what our logo symbolizes – a joystick merged with a writing quill, as in computer gaming meets narrative. This encounter is hardly a new one, as it can be traced back to early 1980s text-based adventure games like Zork pronouncing themselves to be “interactive fiction.” And it is hardly an uncomplicated one as the ludology vs narratology [1,2] debate has shown, stating in the late 1990s, in which ludologists effectively declared narrative and interactivity to be largely incompatible. This sometimes heated debate lost most of its initial steam and was finally put to rest by Gonzalo Frasca [3] and Janet Murray [4]. Yet even now, with games studies scholars seemingly embracing narrative as indicated by Espen Aarseth recently calling Jesper Juul, Markku Eskelinen, and Gonzalo Frasca “narratologists” (in a keynote at ICEC 2012 as reported by Michael Nietsche), the debate is far from over, as a recent discussion on Gamasutra indicates.

Not only is the debate far from over, it has hardly begun, as Frasca’s paper rightly indicates, the “debate on the issue never took place” [3]. But what is the issue? Beyond “discipline trouble” between games studies positions and perspectives more formally routed in traditional humanities, there still is the largely unanswered question of narrative in computer games and other interactive forms in digital media. I have suggested elsewhere that one point of departure from which to explore this exciting field is to take digital interactive forms as a new kind of narrative, dissimilar from traditional forms such as the novel, the movie, or the stage play, and therefore requiring a separate theoretical understanding [5]. I feel this ongoing theoretical investigation is necessary to ultimately answer Frasca’s rightful challenge for an “alternative definition of narrative” [3] and Marie-Laure Ryan’s call for the theoretical definition of an expanded range of “narrative modalities,” [6] which Frasca also references.

However, one point of departure is hardly sufficient to fully describe as big a phenomena as interactive narrative in digital media. This understanding has lead to the Games and Narrative group, which combines a range of perspectives, from semiotics to psychological aspects to media studies. We are aware of the differences in our points of view, but we do not see them as mutually exclusive, and rather as interconnected pieces that help us move along on a path towards a better description and understanding. This is what we mean when we present different perspectives as steps towards a unified theory of interactive digital narrative, in an upcoming article for the journal Transactions on Edutainment.
What also unites us is a perspective that connects theory and practice. As theorists/practitioners, as creators of interactive digital narratives (Digdem and Tonguc), CEO of a game company (Mads), designer of location-based games (Gabriele), and creator of an interactive narrative authoring system and practicing artist (yours truly) we are as keenly aware of the practical challenges of digital media as we are of the theoretical implications. Moreover, we feel that the practice and its particular challenges informs and enhances our theoretical understanding.

Finally, our logo indicates a unity of narrative and games/interactivity and thus symbolizes the departure from a perspective that takes the two elements as separate. The narrative we are talking about is inherently interactive and not narrative with interactivity tugged on. Interactivity then is not just another design parameter to think about, but rather a fundamental element. In contrast, Henry Jenkins has pointed out [7] what elements of traditional storytelling can be used as starting points for interactive digital narrative. He is certainly not alone in taking the story in more traditional media as the focal point. Our understanding re-centers the focus on narrative forms in interactive digital media and computer games. This change of perspective allows us to see not just derivative forms of narrative, but a new exciting opportunity for human expression.