The relationship between Artificial Intelligence and Narrative Theory is an important aspect of research into Interactive Narrative. In this book chapter, I consider its historical development and propose ways how to improve the relationship. Essentially, AI researchers also work on narrative theory and this contribution should be recognized by the humanities. 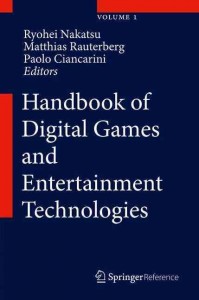 In part 4 of the discussion, Chris talks about his latests project Siboot and identifies “five killer tasks in IDN,” while I bring up the question how the audience understands IDN.

You’re right that the Holy Grail is beyond our reach; I have tacitly admitted as much with my Siboot project, which is half-game, half-storyworld. The interactive storytelling in Siboot uses only about three-quarters of the technology in SWAT; I have ripped out a lot of the more complex components. I dumped the ability to travel to stages; that’s all handled directly by the Engine. I limited Actor attributes to just three; I replaced the Tinkertoy Text system with an iconic system that is computationally simpler. Only two actors are allowed on a stage at once; no three-party interactions are allowed. There’s no hiding, no spying, and no automatic lie detection. I can’t recall some of the other simplifications I have made.

END_OF_DOCUMENT_TOKEN_TO_BE_REPLACED

In part 3 of the discussion, Chris expands on the disciplinary divide in the field, before discussing a communal approach versus the single genius. Finally, he lays out his approach and talks about his current project Siboot. In turn, I talk he audience and the difficulty to extend something as well known (by almost everybody) as narrative.

Wow! That was a great piece. It’s sort of “A Quick Summary of the Field of IDN in 2500 Words or Less”. I don’t keep up with what others are doing, largely because I don’t have access to the printed academic literature and I can’t go to the academic conferences. On a deeper level, I’m a troglodytic lone wolf anyway. I *like* my cave!

END_OF_DOCUMENT_TOKEN_TO_BE_REPLACED

In part 1, the discussion started around the question of authorship in interactive narrative, this second part concentrates on the issue of computational story models and how different perspectives in this interdisciplinary field affect the discussion and research agenda. I also bring up the question of enabling collaboration through exchange standards.

I am pessimistic about the prospect of making interactive storytelling authorship available to Everyman. This was in fact the goal of the Erasmatron, and it was a spectacular failure — the system required was far to complicated. With Storytron I made some aspects of the technology more accessible, but the underlying model grew more complex.

The central problem, however, is the difficulty of creating a computable model for storytelling. Every effort I have seen relies on a different conception of the structure of a story and the process of storytelling. We cannot collaborate because we all see storytelling differently.

END_OF_DOCUMENT_TOKEN_TO_BE_REPLACED

I wrote a paper summarizing central issues in interactive narrative, to be published in the Springer Lecture Series in Computer Science: Five Theses for Interactive Digital Narrative.

My intent was to start a discussion on the state of affairs in the field, on achievements, pertinent questions and areas for future research.

Chris Crawford reacted quickly and we entered in an ongoing discussion, which Chris and I decided to present here, inviting readers to comment and offer their views.

As it has grown long (and is still continuing at this point) I decided to present it in installments, although the complete discussion will be available, for those who want to read it in its entirety.

END_OF_DOCUMENT_TOKEN_TO_BE_REPLACED

This is what our logo symbolizes – a joystick merged with a writing quill, as in computer gaming meets narrative. This encounter is hardly a new one, as it can be traced back to early 1980s text-based adventure games like Zork pronouncing themselves to be “interactive fiction.” And it is hardly an uncomplicated one as the ludology vs narratology [1,2] debate has shown, stating in the late 1990s, in which ludologists effectively declared narrative and interactivity to be largely incompatible. This sometimes heated debate lost most of its initial steam and was finally put to rest by Gonzalo Frasca [3] and Janet Murray [4]. Yet even now, with games studies scholars seemingly embracing narrative as indicated by Espen Aarseth recently calling Jesper Juul, Markku Eskelinen, and Gonzalo Frasca “narratologists” (in a keynote at ICEC 2012 as reported by Michael Nietsche), the debate is far from over, as a recent discussion on Gamasutra indicates.

Not only is the debate far from over, it has hardly begun, as Frasca’s paper rightly indicates, the “debate on the issue never took place” [3]. But what is the issue? Beyond “discipline trouble” between games studies positions and perspectives more formally routed in traditional humanities, there still is the largely unanswered question of narrative in computer games and other interactive forms in digital media. I have suggested elsewhere that one point of departure from which to explore this exciting field is to take digital interactive forms as a new kind of narrative, dissimilar from traditional forms such as the novel, the movie, or the stage play, and therefore requiring a separate theoretical understanding [5]. I feel this ongoing theoretical investigation is necessary to ultimately answer Frasca’s rightful challenge for an “alternative definition of narrative” [3] and Marie-Laure Ryan’s call for the theoretical definition of an expanded range of “narrative modalities,” [6] which Frasca also references.

However, one point of departure is hardly sufficient to fully describe as big a phenomena as interactive narrative in digital media. This understanding has lead to the Games and Narrative group, which combines a range of perspectives, from semiotics to psychological aspects to media studies. We are aware of the differences in our points of view, but we do not see them as mutually exclusive, and rather as interconnected pieces that help us move along on a path towards a better description and understanding. This is what we mean when we present different perspectives as steps towards a unified theory of interactive digital narrative, in an upcoming article for the journal Transactions on Edutainment.
What also unites us is a perspective that connects theory and practice. As theorists/practitioners, as creators of interactive digital narratives (Digdem and Tonguc), CEO of a game company (Mads), designer of location-based games (Gabriele), and creator of an interactive narrative authoring system and practicing artist (yours truly) we are as keenly aware of the practical challenges of digital media as we are of the theoretical implications. Moreover, we feel that the practice and its particular challenges informs and enhances our theoretical understanding.

Finally, our logo indicates a unity of narrative and games/interactivity and thus symbolizes the departure from a perspective that takes the two elements as separate. The narrative we are talking about is inherently interactive and not narrative with interactivity tugged on. Interactivity then is not just another design parameter to think about, but rather a fundamental element. In contrast, Henry Jenkins has pointed out [7] what elements of traditional storytelling can be used as starting points for interactive digital narrative. He is certainly not alone in taking the story in more traditional media as the focal point. Our understanding re-centers the focus on narrative forms in interactive digital media and computer games. This change of perspective allows us to see not just derivative forms of narrative, but a new exciting opportunity for human expression.

Welcome to the Games & Narrative blog

We are an international research group on interactive and game narrative.

We describe and analyze new narrative forms in interactive digital media reaching from
videogames to experimental art projects. Our goal is a better understanding of these
phenomena.

Since 2009, through workshops and publications, we have been developing a descriptive
methodology and a taxonomy of examples with the goal of a unified theory of interactive digital narrative.

On this blog, we will share our activities. Feedback is very welcome, as well as examples of innovative digital narratives.