Andrew Kennedy blogs on The Future of Storytelling: “By all indications, 1979 Revolution, the episodic action/adventure game set during the turbulent 1979 Iranian Revolution, is shaping up to be one of the standouts of the “golden age of narrative-driven gaming.” Slated for a spring 2015 release, the game’s development has been a labor of love for the entire team at NYC-based iNK Stories and its cofounders, Navid and Bessie Khonsari”.

Read the full preview at http://futureofstorytelling.org/1979-revolution/

Elegy for a Dead World is a game that puts a new and interesting twist on narrative as a game mechanic. Instead of following a scripted story, the game quite literally ask players to write it while following some cues. From the website: “In Elegy for a Dead World, you travel to distant planets and create stories about the people who once lived there. Three portals have opened to uncharted worlds. Earth has sent a team of explorers to investigate them, but after an accident, you are the sole survivor. Your mission remains the same: survey these worlds and write the only accounts of them that outsiders will ever know”.

The game is available now at http://www.dejobaan.com/elegy/

Thanks Mauro Salvador / Dotventi for finding this gem!

Emily Short, author and researcher of Interactive Narratives, has published a review of “Necklace of Skulls” and “The Sinister Fairground”, both by Cubus Games. She writes: “Necklace of Skulls is a fairly substantial piece. I played five or six times and never actually won, though I think I got close, and in each case there was pretty significant variation in my experience of the midgame. It’s possible to take several different routes on your journey to look for your brother (picking up, of course, a wide range of codewords and inventory items along the way). In the late game, this can yield satisfyingly fairy-tale payoffs in which creatures you earlier helped came to your rescue, or mysterious gifts from elderly peasants turn out to be the basis of an ingenious bit of self-rescue”.

Read the full review at https://emshort.wordpress.com/2014/12/17/necklace-of-skulls-the-sinister-fairground-cubus-games/

Digital production agency B-Reel created a short interactive music video for Bobby Womack’s track ‘The Bravest Man in the Universe’. In this short experience, the music is augmented by a short narrative with interactive affordances such as tapping, pinching and dragging various black holes, rotating and navigating asteroid fields, planets and stars. 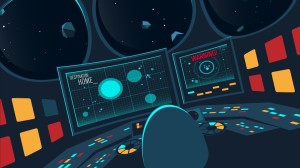 ‘The Bravest Man in the Universe’ is available for free at http://www.bravestman.com/, but it works only on mobile devices.

…But That Was [Yesterday] is a piece of interactive narrative about remembering the things that really matter in life, and the people who gave them to you. The author writes “It is a game that attempts to show one how to move forward in life. In trying to communicate specific emotions with the player, text and input are minimized, relying instead upon player-driven interactions and a dynamic soundtrack”.

Play it online for free at http://www.onemrbean.com/?p=114

Albino Lullabyis a game that seems to rely on the mixture of narrative genres to produce uncertainty, a sense of uncanny and horror. Adam Smith writes: “My favourite thing about the demo was the tonal uncertainty. Rather than being pure terror, or adrenaline-pumping tension, Albino Lullaby is packed with odd little jokes alongside unnerving suggestions and grotesque realisations. The world is confusing – having elements of Victorian gothic and steampunk alongside its abattoir parlours – but there’s a thread of internal logic running through”.

Read the full article at http://www.rockpapershotgun.com/2015/03/04/a-twisted-family-tree-albino-lullaby/ and get the preview episode at http://albinolullaby.com/

Peter Eliot has compiled a carefully crafted annotation of the cult game ICO. He writes: “ICO is at once intriguing and confusing because it insists on holding silence on its own narrative. It shows and suggests enough to convince us that something big is going on but will not tell us what it is. So I propose an exercise: I am going to take a walk through the story and point out noteworthy elements that may help us make sense of what is happening. I will not be a neutral observer; I will advance my thoughts on what I observe”.

Ice-bound is an upcoming narrative experience combining a printed book with an iPad app. Telling a multi-layered story about a polar base sinking into the ice, a famous author’s unfinished final novel, and a doubt-riddled artificial intelligence given an impossible task, the project uses procedural generation and augmented reality to help create a truly unique experience where story and gameplay melt into one another.

A collaboration between Aaron Reed and Jacob Garbe, two award-winning writers and game artists, and inspired by the fractal narratives of Borges, Danielewski, Calvino, and Nabokov, Ice-bound is expected to debut in early 2015.

Aaron A. Reed has shown projects at IndieCade, IGF, and the Slamdance Guerrilla Gamemakers Festival. His 2009 interactive fiction Blue Lacuna was named one of the top ten text adventures of all time by the IFDB, and he served as lead writer for the ambitious AI-driven storygame Prom Week, which garnered both IndieCade and IGF nominations in 2012. His experimental narrative collage-maker 18 Cadence was a Kirkus”Best Book App” of 2013 and an IGF Nuovo Honorable Mention.

Jacob Garbe is a writer and new media artist working with augmented reality and procedural narrative. He was the recipient of the 2010 International Aeon Award for short fiction, and was recently featured as an electronic literature artist in the Pathfinders: 25 years of Experimental Literary Art exhibit at the Modern Language Association. He is currently working with Storybricks exploring dynamic text generation for the upcoming MMO Everquest Next.

END_OF_DOCUMENT_TOKEN_TO_BE_REPLACED

“Her Story” is a video game where player listen to the interview of a woman whose husband has gone missing – and they are cast into the police researcher trying to piece the truth together. Game designer Sam Barlow says: “In most games, because the story is communicating your challenges, it’s a usability thing. Everything has to be on the surface: ‘Go here, kill this, do that’. This mechanic of searching the woman’s words kind of forces you to engage on a deeper level – it highlights those layers of meaning. The heart of any human story is subtext.”

Read the full article at http://www.theguardian.com/technology/2015/feb/27/her-story-computer-game-true-detective-meets-google